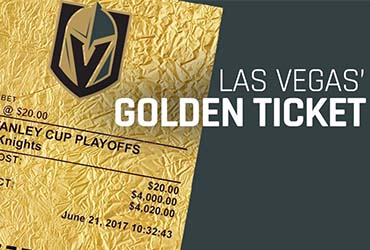 Las Vegas is a city that hates underdogs, so what happens when the best underdog story of the year is its own? Leave it to a team in Las Vegas to defy the odds. The expansion Vegas Golden Knights have gone from the biggest underdog in NHL preseason wagering to just 4 wins from perhaps the most unexpected championship in pro sports history.

With that being said, not everyone in Vegas is necessarily enjoying the Golden Knights’ miraculous run. The LA Times reports that Jay Kornegay,  the Las Vegas Superbook race and sports director, is facing the repercussions of the uncertainty that a new expansion draft brings. Westgate Superbook gave the Golden Knights 300-1 preseason odds before changing those odds to 500-1 to encourage betting — the worst odds in the NHL. According to the Westgate Las Vegas SuperBook, just 13 fans managed to lock in the Golden Knights at 500-1 from Oct. 4 to 8.

Did you get a ticket? You don’t have to have a bookie to place a bet for you on this, or any other sporting event. Just check out one of the many sportsbooks offering great incentives.

All Eyes will be on MASTERS Golf

Only Match ONE Lottery Number and Win

This site uses Akismet to reduce spam. Learn how your comment data is processed.